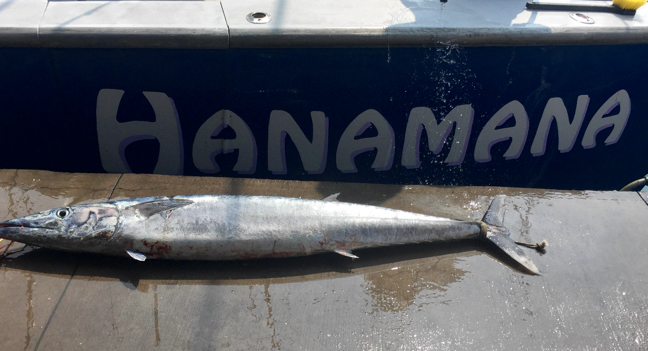 Well big news on my previously salty Wahoo or Ono fishing =lack of luck, on a recent trip Kona Hawaii I caught my Wahoo finally! I am not even bummed that my daughter caught a bigger one. Afterwards, we had a cold Longboard Lager and that night we had some delicious Ono on the grill. Nothing better than Ono that fresh!

Our boat was the Hanamana out of Kailua, Kona. Captain Chip and Anthony know where the fish are and do a great job. We had a couple of great days on the water!

I have a fishing confession, when I lived in Cabo and as much as I tried, I have never boated a wahoo. I am an unsuccessful Wahoo Fisherman. I suppose that Wahoo fishing has been my grail. I have had them on the line, to the boat, then they turn on that Lamborghini speed and with those sharp teeth, gone. Hasta la bye bye, pau, out there, strike three dude.

So, I will keep trying but in the meantime I have been successful in cooking and grilling this delicious fish, regardless of my dismal attempts at Wahoo fishing!

One important note, check out our other fish pages too! Many of the sauces and preparations work super for Ono or Wahoo! 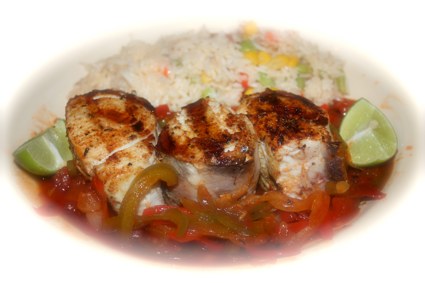 This grilled Wahoo - Ono recipe is also great with any grilled fish, mahi-mahi, tuna, barracuda and even could be used with grilled shrimp. The sauce itself is a variation of a Creole sauce with the obligatory Cayman rum, and it has a nice sweet and sour contrast.

4 pieces of ono or Wahoo six to eight ounces

Use  your favorite mild rub or sprinkle the Ono with paprika, granulated garlic, salt and pepper 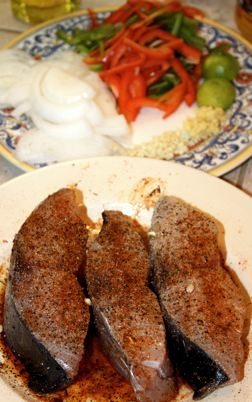 2 ounces of Tortuga Cayman Rum if not available use a nice gold rum or even dark, they have more flavor than white.

Now, if cooking on a gas stove flame with the rum. Caution you may get a pretty good flame from this! Your guest will love it, just be careful. When the flames burn of you are done. Check the saltiness and adjust if needed. Keep warm. 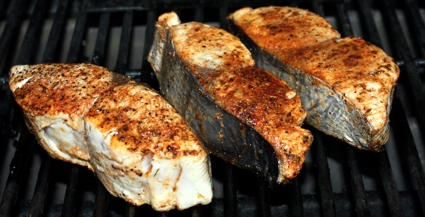 Prepare you grill for a nice hot direct fire. I prefer charcoal on this recipe but if using a gas grill you can add some smoky flavor by wrapping wood chips in foil, then poking some holes in it with a cooking fork, place in a hot spot away from the food. (In case they catch fire).

Cook your Ono, remembering not to cook too much. Ono or Wahoo likes to be cooked medium rare to medium and definitely not well done. It is very lean and will be dry if over cooked.

When the fish is done, place on top of the Caymanian rum sauce. I like to serve this with a nice rice pilaf.

Wine, a nice oaky chardonnay can stand up to the sauce, but Mojitos? Perfect!

Back to Great Grilling Fish Recipes from Wahoo Fishing

Back to Great Grilling Homepage